How I single-handedly raised almost $40,000 in crowdfunding: Kylie Gusset & the Ton of Wool project

Last week, I met Kylie Gusset, a yarntrepreneur who raised almost $40,000 in crowdfunding on Australian crowdfunding website Pozible.com to process a ton of Australian wool in Australia. Her motivation for the project is that processing wool in Australia is fast becoming a dying art, and wool needs to stay in Australia for creation from sheep to skein in order to support small farmers and micro business. She was generous about sharing her learnings from the experience and tips for success. 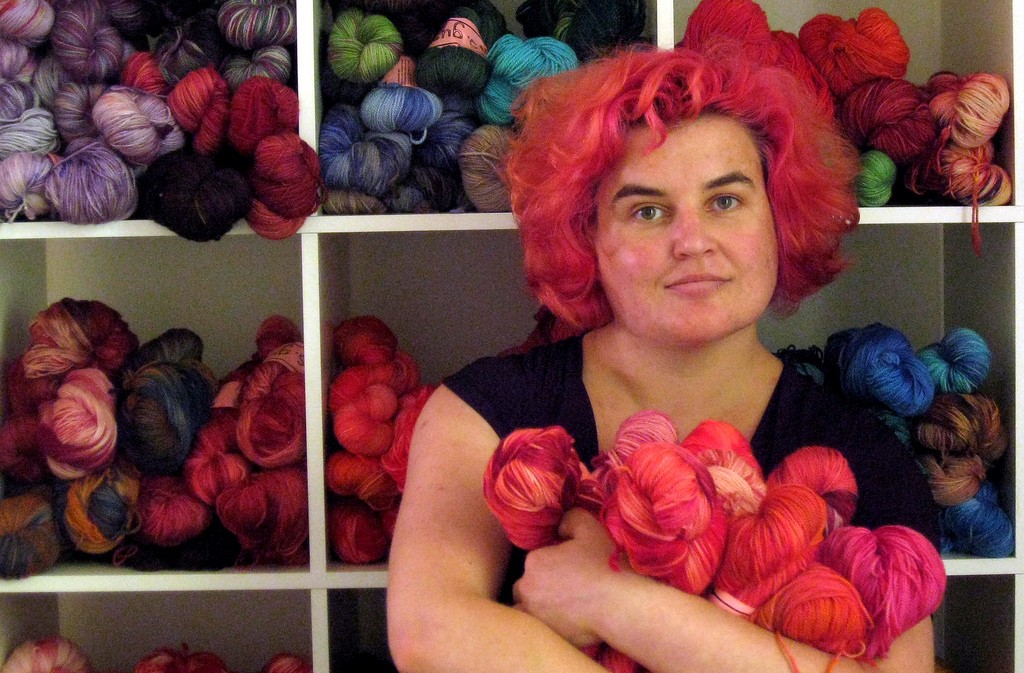 Develop some social media savvy and community support before you start

It’s important to develop a community and some support BEFORE you start your campaign. In Kylie’s case, she was known in her industry before she started crowdfunding. She had been a writer in Yarn magazine and a moderator on the popular knitters’ and crocheters’ site Ravelry.com which has over  2.4 million users. She also had an established blog in the same niche.  When she launched her campaign, she noticed that 70% of her traffic to the Pozible.com page came from Ravelry.com – proof of the value of having an engaged community first.

Kylie launched the crowdfunding campaign at Bendigo Sheep Show with brochures. Although it was the right target market, the brochure strategy was a complete flop.  Kylie found online methods of marketing worked the best and – although she didn’t use one – she says that awesome videos do help. (She recommends Creator’s Guide to Video as a good primer to start with on putting together crowdfunding videos.)

You must be dedicated to giving your crowdfunding campaign your best shot.

None of this putting it up there and seeing what happens. You have to put all your passion and  energy behind it and really be determined to do what it takes to succeed. You only have to talk to Kylie (or read her blog) to see how much passion, energy and commitment she put into making this project happen. Failure was not an option and, as you will see, she did everything she could to ensure it would be a success.

They won’t. Crowdfunding sites are great platforms but you have to be prepared to work your campaign hard and really push the marketing and publicity yourself. You need to put together a marketing plan for the campaign and use all the resources you have to get it in front of people.

Use influencers to give your crowdfunding campaign a kickstart. 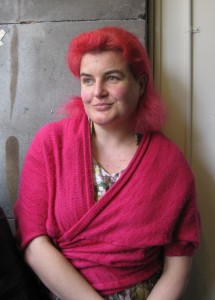 Kylie found that actively targeting the right influencers really kicked her campaign along.

Politicians seem like unlikely supporters for a campaign about processing wool, but Kylie had used the proposed closure of the CSIRO scouring plant to develop contact with Australian Federal politician Christine Milne’s office. Kylie made them aware that the plant was a key piece of infrastructure for niche wool processors in Australia and Christine Milne used her influence to make sure the plant stayed open.  Although Kylie wasn’t able to use the plant in the end (because it took a long time to become operational), this contact resulted in Christine Milne supporting Kylie’s crowdfunding campaign through social media such as Facebook.

Kylie also successfully leveraged the media. She identified a journalist who was a key influencer in her niche and her first words to him were, “You are going to love me!” The combination of her confidence and passion and a great story worked for her and resulted in media exposure for her crowdfunding campaign.  It helped that one of her major points of difference to other stories was a visual one –  a woman with pink hair surrounded by colourful yarn stood out against the standard photos of farmers in the paddock. The journalist also recommended her to other media people which made her media presence snowball. All this publicity opened doors and resulted in an invitation to Wool Modern, Australia’s prestigious wool showcase, where she met top fashion designers and was further able to share her story.

Most campaigns get money coming in when they are launched and at the end before the deadline, with not much happening in between. Therefore Kylie recommends working with that crowdfunding cycle. You want to get funders in there early and create a buzz around the campaign.

Kylie suggests offering an early bird special as a way to do that. This is a great deal which is only available for early funders. It could be a special price or a special limited edition of the product or even special bonuses. That way, the crowdfunding campaign starts with some success and buzz is created around the campaign. She will definitely use this technique next time.

Allow yourself enough time to deliver

It will probably take longer than you expect to deliver both the rewards and the finished product. On average, for projects on Kickstarter.com, rewards were estimated to take about 3 months to deliver and in reality took an average of 8 months before pledgers received their rewards. Include this timing knowledge in your campaign planning and spell it out to your backers so their expectations are realistic too.

Kylie found it was important to make sure that she made her rewards do-able. She recommends not promising something that will take a lot of your time. For instance, some of her backers wanted her to hand dye their yarn for them. Kylie agreed but it quickly became a headache as she realised that she isn’t (and doesn’t want to be) a process dyer. So have a think about how much time and hassle things will take and make it easy for yourself.

Kylie also found that because she was dealing with a whole supply chain in her project, it meant that  delivery times to backers could blow out really easily. She recommends that this is something to watch and plan for.

Get your communications right

Communicating with your backers is one of the most important things you can do for the success of your crowdfunding campaign. Things will not always go as expected but most people are okay with that – if you communicate with them. When the shit hits the fan, it’s often because people haven’t communicated well.

Kylie says it’s really important to have a plan for how you will organise communicating with your backers. She started a discussion group on Ravelry.com where she could give frequent updates and where backers could ask her questions. She also posted frequent updates on her Pozible.com page. She organised all her 372 backers’ contact details into a mailing list so she could streamline communications.

Work out the logistics of delivering your crowdfunded product beforehand. 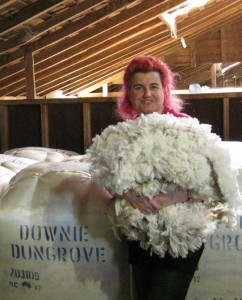 Having an idea and asking for money to do it is great, but when you are funded, you need to be able to deliver with the minimum of fuss. Logistics issues have the ability to make the delivery process run smoothly or stuff the whole thing up and leave you in debt. Kylie learnt that it is important to plan this process meticulously to avoid stress and to make sure your project runs to budget while leaving you with some profit.

One problem Kylie faced was that postage prices rose between the time she was funded and the time the wool was ready to post. This ate into her profits from the project. She also found that although the wool was light, it was bulky when packed and for this reason, she couldn’t find a fulfilment house that would do the packing and postage for her. These two logistics issues were solved, but caused some stress and delay.

Next time, Kylie will plan the logistics in as much detail as she can and also plans to outsource much more of the process.

Plan your finances like your life depends on it

If your campaign gets funded, you will be essentially be running a business and responsible for delivering a product or service to customers, so you need to plan your finances with the same rigor as you would for a business plan.

Kylie says “If your figures are wrong, you are screwed.” She spent a lot of time on her figures before she launched the crowdfunding campaign and made sure both her accountant and bookkeeper checked them.

Kylie suggests that you slightly overestimate your figures to account for unforeseen and unpredictable expenses (like the increase in postage prices she faced.) She also emphasises that you should charge retail prices for your deliverables as a way of making sure you end up with enough profit in the project to compensate for your time.

One thing crowdfunding campaign organisers often don’t think about is the logistics of handling the money you raise. You need to think about questions such as: Where are you going to put the cash when you get it? How will you access it? How can it work for you while it’s sitting there? Kylie ended up putting the money on her mortgage and redrawing it when expenses became payable. (If you are running your campaign as a company, you are probably best to keep your cash in a separate company account.)

Kylie’s successful first crowdfunding campaign has been like a pilot project for her, enabling her to learn the process in lean startup mode. She plans to take what she has learned and process further batches of wool to create a unique niche business.

In Kylie’s words, “A strong community and a strong plan will get you over the line everytime.” [Tweet this]

If you are thinking of starting a crowdfunded project, Kylie has organised an event where you can learn everything you need to know to do it successfully from an incredible lineup of speakers. It’s called Crowdfund Your Startup Thousands and is being held on October the 11th at 6pm in Melbourne. You can find out more by clicking on the link.

And if you have questions, ask away in the comments. I’m sure Kylie will pop over to answer them.

This article is about the pitfalls and pressures when you you run a successful crowdfunding campaign.

Tags: crowdfunding, finance, How to be an entrepreneur, women entrepreneur Categories: Startup Stories
Prev
Next