How to build your startup like a serial entrepreneur: John Fearon and DropMyEmail.com

Sometimes starting a new idea in the middle of your current startup can be a distraction which leads entrepreneurs down an unproductive path. But in John Fearon’s case, the path lead to a successful new business.

The business idea came while he was working on his current focus at the time, a startup called www.EatAds.com. While developing EatAds, John faced a problem. He needed to backup the website and data and there was no reliable way to do it. John decided to build a solution himself and in 3 weeks, he and his team had built their first version of the new service. Dropmysite.com and it’s related product, dropmyemail.com were born. Since then, John has raised just under $1 million in investment and built the service to 650,000 users.

In this interview, he reveals how to build a startup and what he has learnt along the way – both in this project and his other ventures.

Build a Minimum Viable Product as soon as possible

Serial entrepreneurs get into the habit of testing ideas quickly. Once John found that there was a need for a backup service, he focused on getting something out to the market as quickly as possible to validate the idea.

John used a free pricing strategy in the beginning to test and develop the service. This allowed him to gain momentum with some leeway to handle users’ problems. The original version was buggy and, in his own words, “hardly worked.” For instance, it made some users’ unread emails show up as read.

John’s response to the problems was to feel bad  but keep going anyway. “You need to accept that there will be problems with your MVP (Minimum Viable Product) and your goal should be to get a basic idea across of what you are trying to do.”  John made sure that the service would meet customer expectations before he started charging for it.

…but be realistic about it

However, with all the talk about minimum viable products these days, John feels that some entrepreneurs have a false sense of how long building an MVP should take.

Although it took him 3 weeks to build his MVP, he had spent the 4 – 5 months previously building a functioning development team as well as his experience from previous ventures.

He encourages aspiring entrepreneurs to realise that it’s a journey – and that an integral part of the process is experiencing lots of failures and learning from them.

…a word about splash pages

We have all encountered websites that are nothing more than a splash page asking us to submit our email with very little information. The reason people are using these is to try to gauge interest by getting sign ups, before building a product.

John is not a big fan of  this strategy. Because there is so much competition for ideas now, people are jaded by splash pages. His take on how to build a startup early on is to have something on your site that works and people can use. This will get them excited and these early adopters will  tweet and blog about your product.

In the last year Dropmysite/Dropmyemail has raised just under 1 million dollars in investment and has served over 650,000 users. Pretty impressive but they are not driving around in Ferraris.

John is very conscious about conserving cash. He knows having enough in the bank could be the difference between the business succeeding and going under. He spends money only when he absolutely needs to and when it will drive the business forward. No such thing as a nice office or fancy furniture – not at this stage anyway. 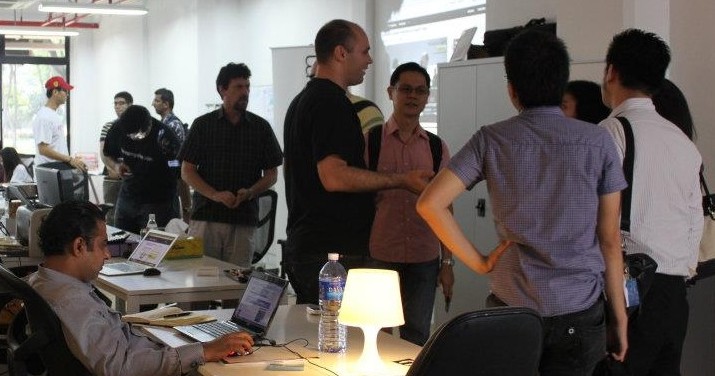 The team still work in the co-working space, BLK71, where they started out. This gives them subsidised rent, saving precious cash. Although it’s not flash, the upside is access to other startups, mentors and investors.

In addition, everybody on the team has a salary cap and knows what everybody else earns – which is less than their previous job. John has made sure they are compensated with equity in the company.

…and make money in other ways to stay alive

John still does consulting work occasionally to bring in some extra cash. His philosophy is that he will do whatever it takes to keep the startup alive and able to fight another day.

John does believe in spending on traction to give your startup the momentum it needs to survive.

A startup myth many aspiring entrepreneurs hold is that it is a bad idea to spend money on marketing because their product will go viral. John points out that even at Facebook, their third or fourth hire was a PR guy and that they spent millions buying traffic.

…and don’t rely on virality. 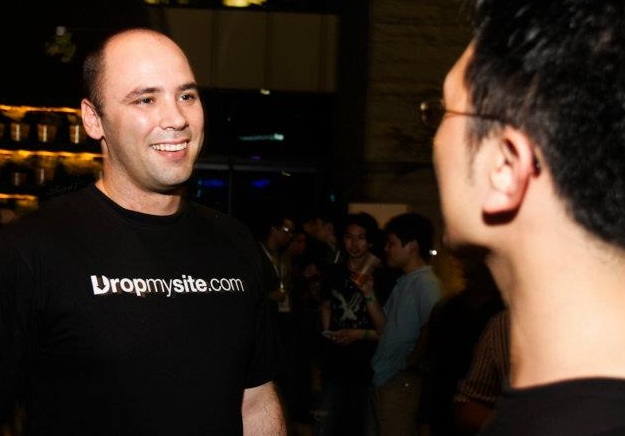 You need an active marketing plan to get people using your product.  The strategies you use will depend on your product and your audience.

John has used Facebook and Google ads and taking journalists to lunch among other strategies. He has also found that spending money at the bar is a good investment – “buying a few drinks for the right guy in a target organisation can be invaluable”.

Building a growing community of active paying customers is essential if you want investment dollars. Spend on marketing after you have an MVP that you know works and you have proved there is some demand. Then you can go to investors with some credible traction.

It is easy to delay the hard decisions that need to be made as founder of a new startup. Good leadership requires being honest with ourselves about taking the hard actions. John says, “Make hard decisions early – it doesn’t make them any easier, but it usually means you end up with a better outcome.”

One of the hardest decisions John has had to deal with is firing people. He has found that as long as he is honest, people are able to deal with it and move on.

“I have this much money in the bank and I have to let you go because there is no immediate prospect of it changing.” or

Although this is hard, he knows if he doesn’t protect the cash flow of the business, there will be no business in the future.

…pulling the pin on businesses

Putting the development of EatAds on hold was also a hard decision. John and the team had worked hard on it for 6 months but couldn’t raise money and so had to pull the pin. People knew they were working on it and so his personal pride was at stake.  However now, after a year of the product being on hold, John has been able to take EatAds forward again with new co-founders and investors.

Fail quickly and get over it but don’t give up

John says you need to believe in what you are doing. He sums it up this way: 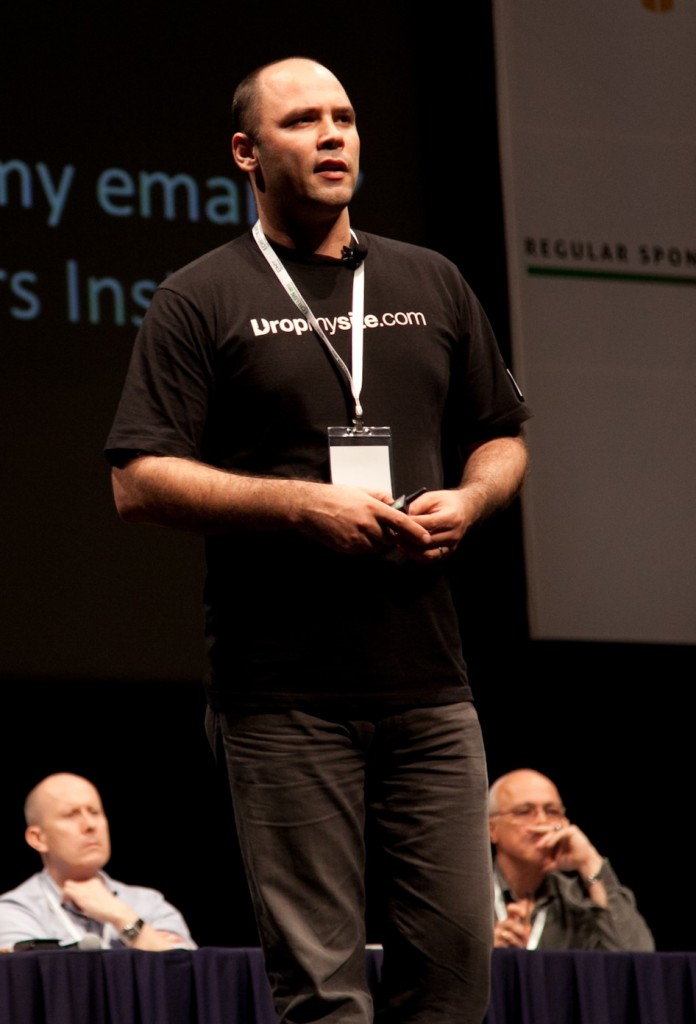 Having said that, when John started Dropmysite, there was only one other competitor. Since then, no one else has entered the market. John believes this is because, although the service is needed, it’s not a sexy idea. “It’s not mobile, it’s not cool.”

The decision to continue with the business wasn’t based on wishful thinking though. Early on, the team convinced a blogger to write about them and within a few days they had been blogged about another 50 times. This was encouraging proof that people were interested in the product.

Find the right team – at the moment

John has built a strong team at Dropmyemail. Everyone has a wealth of experience either in startups or at respected corporates like Google, or both.

…it’s all about relationships

John’s approach to team building is a long term investment. He says, “It’s all about relationships. It’s not a quick process. It can take years.” He looks for like-minded individuals who want to do something bigger with their lives. Often they have had some experience with startups and then gone back to the corporate life. “Some of the best places to get people is from failed startups. They’re addicted to it. They’ve failed but want to go again. They know it’s hard. They’ve already built the right character to make it.”

…don’t be an arsehole

Some people don’t last and will leave. Sometimes they are great in the beginning but are not right long term. John has turned over 100% of his staff since he started. However he has kept the relationships with those who have left and he helps them to find new positions. He says, “You can’t be an arsehole in a startup. It comes back to bite you. You are very vulnerable as a startup guy.”

Action: how to build a startup like a serial entrepreneur

Here’s some actions you can take to try out some of John’s strategies. Grab a pen and do some brainstorming now:

If you have any questions for John, pop them in the comments. I’m sure he will pop over to answer them.
And last of all, if you would like to know more about John’s website and email backup services, head over to Dropmysite and Dropmyemail and check them out.