How I created and launched a startup from an internet café in Zimbabwe, Africa

Think you can’t start a business?  If this guy can do it, so can you! The inspiring story below is written by Munyuki Manatsa, a Zimbabwian tech graduate and now young IT entrepreneur who turned an 80% unemployment rate into an opportunity to create and  launch his startup, www.mixdem.com. He did this in 3 weeks while battling obstacles such as no money, no electricity and no internet connection.
Below his story, I have added a few takeaways we can all learn from. Enjoy!

How I created and launched a startup from an internet café in Zimbabwe, Africa 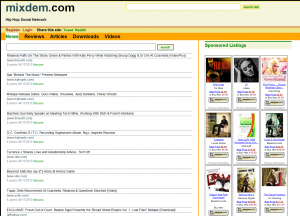 After my last interview with a big mining firm, I got fed up. I had gone to many interviews with big companies, and the result was always the same. With unemployment at a staggering 80%, one can imagine the stiffness of the competition, now add corruption and your chances are next  to none.

I graduated with a Bsc Information Systems from Midlands State University of Zimbabwe in December 2009.When I graduated I had high hopes of a good job – two years later I realised that no one was probably going to give me that chance any time soon.

Confronted with a not so rosy future , I decided I was going to build a web application. I had read so many stories, so I was optimistic, plus it was the only chance that I had to be noticed.

I needed an idea , so I brainstormed a couple of ideas but none of them interested me. Then it dawned on me that I needed to solve a problem that I had experienced. If people didn’t like the idea , I would just use my application for my own good. I visit a lot of  hip hop sites and sometimes a site might have only one good story. I decided to build a  hip hop link aggregator with social networking features. It would also give me an opportunity to sharpen my programming skills.

My programming skills were a bity rusty, I did not have a internet connection, there was no one to help if  I encountered a problem and I did not have  a debit or credit card to purchase a domain  name or hosting. It seemed impossible but I had no choice.

First, to solve the domain name problem, I contacted a friend who had a debt card. He purchased the domain name  www.mixdem.com for me. With that solved I searched google for a good free webhost and found Capnix.

Having purchased the domain name and found hosting, I began development of the website. I would work mostly during the night because during the day the would be no power most of the time. When I encountered a challenge , I would work at it until I found a solution.

Three weeks later I had a working prototype and was ready to test it. I now wanted to launch. I went to the internet café and created an account with Capnix Hosting. I logged to my Godaddy account and set the nameservers to point  to my Capnix account. I uploaded the website and set up the database. Then I waited for the nameservers to propagate.

After two days I checked and the website was not yet accessible. I had made an error in  created  the account so I had to do it again. After hours of trying to figure it out, I finally managed to set it up and my website was now visible.

The time to promote the website had come. I set up a Twitter account and engaged with the hip hop community there. I also posted on Facebook about the project and a couple of classifieds websites. I was just looking for feedback and was not expecting a  lot of traffic.  About a week after the launch, the response has been humbling. Considering that I did not do much marketing other than tell few friends, the site had 500 unique visits which is quite impressive. A lot of people have contacted me with business ideas and others want me to freelance on their projects. As a result of this project, my future now seems bright and I have started getting a lot of opportunities that I did not have before.

If you find yourself in a position like me, don’t lose hope – instead start a project and tell people about it.  It doesn’t have to be perfect. [Tweet this] And use all the resources you can get!

What we can learn from this IT entrepreneur:

I think this is an incredible effort and look forward to seeing what mixdem.com evolves into. I’m sure with Munyuki’s passion and persistence, he will do something worth noticing. Give him some love and visit his site and his blog.

What did you learn from Munyuki’s experience? Is there anything you want to apply to your own business? Do you have any tips to pass on to him?

Join the conversation in the comments.